This story, of how a Sydney architect became involved with not-for-profit education in Papua New Guinea, began four years ago when I read Drusilla Modjeska’s novel The Mountain. Her book documents the struggle for modernity in traditional clan-based cultures in post-independence PNG. It unveils some of the myths, the shared history (ours and theirs) and brings to the fore all the colours and smells (the landscape in particular) of the country. Because I’d been born there, her writing evoked strong memories for me. When I finished the book, I wrote to Drusilla. I didn’t know her. But we met shortly after which is when she asked me to join her on a trip to the fjords of Tufi. She explained that she had an elusive project there that needed an architect.

Tropical coastal fjords are rare and the region we flew into on a small Dash8, in the province of Morobe, is accessible only by plane or boat.  With the aim of improving literacy in this area, Drusilla co-founded Sustain Educate Art Melanesia (SEAM for short). There are six villages in this immediate region of Morobe alone. All of them are difficult to reach. Many entail long walks up from coastal landing points along single-file tracks. Each village on the higher ground straddles a ridge with the central area given over to communal use.  These fall steeply away down into the fjords but the land is still cultivated.  It is, to western eyes, idealic. Except for the lack of educational opportunities.

The rates of adult literacy in PNG are astounding. It’s as low as 15% in remote areas. And the proportion of non-literate females is much higher than that of males.  Parents want to give their children the advantages that an education offers. But they don’t want this to compromise their traditional connection with farming lands which they own and care for around the village. They would also like to be able to read to their own children. Modernity presents a huge quandary. As other remote communities in PNG have found to their detriment, the (apparently) easy solution has been to sell off lands for plantations or mining, thereby destroying a land-based traditional society.

The PNG government funds remote schools, each of which is likely to support about 100-150 students of different ages with two teachers.  The schools rarely have electricity, very few books (and even then only exercise books, not literature or reference books), they suffer from a shortage of paper, and have nothing in the way of art supplies or fresh water. There is no shared experience of reading and no written stories locally their own.

It was during this trip in 2014, that the idea for School-in-a-Box started to take shape, as a box of resources that could include water and solar electricity. I started with the idea of a toolkit containing basic low-tech resources. No internet. Light and small enough that it could be packed and transported easily but also tough and durable. Something like a hard carapace on the outside but full of goodies on the inside. And in this, I was recalling giant clam shells, one of which had been cast on the rocks beside a beach where we had stayed overnight.

The box would protect, contain and secure a range of educational resources, to both supplement and support local schools. It would focus on creative writing and drawing but with 3 key differences; the box would cater for adult literacy classes (so that the parents of children could also learn to read); it would be used to tell and record local stories (to foster creative exploration rather than rote learning) and; it would put education in better reach of girls.

I took the tough, standardized, portability of a shipping container and shrunk it down to its most operable size. Then provided a surface to collect and store water and solar energy. Providing fresh water is essential because whole swaths of the country struggle through drought in the dry season. The lack of clean water also means that teenage girls entering puberty, simply stop going to school.

Each School-in-a-Box consists of; one lockable, waterproof, black box; 2 plywood cabinets (which after use, get wheeled back into the black shells and locked up); a 6x8m stretch tent, poles, cables, ties and stakes; 2 flexible solar panels; batteries and an electrical board; 2 laptops; an A3 printer, guillotuine and laminator; paper, books, paints, pencils, crayons and brushes; a 5000 litre water storage tank, and; a water filter requiring no electricity or chemicals.

The (black) boxes are made from polycarbonate and are used by the US army to transport munitions. Everything that we pack into it, like the solar panels, tent and poles, conform to the dimensions of the box. The roof is a translucent fabric that can be packed up tight for transport but then stretched to cover a workable area of 45sqm.

Upon assembly, cooling breezes can circulate freely underneath. This system allows incidental modifications to the form of the roof, depending on the weather. Each side can be lowered down to protect against strong winds. And packed up completely into the box, for more serious weather events. I modified the tent with a large fabric gutter along one side that collects rainwater and feeds it into a pillow tank. This is stored under an elevated platform to shield it from direct sunlight. The local community is asked to contribute the materials and construction of this platform.

Inside the two halves of the the black box, sit two custom-made cabinets in marine-grade plywood. They form a mute box when closed (something like a puzzle), but open up and out in five directions. This way they can be used in-the-round; by groups being given a class on one side, and private study on the other, with storage on the other sides.

In 2015, another trip for community meetings was made to the fjords. Then, with the support from Mundango Abroad, The Readings Foundation, Planet Wheeler Foundation, Victorian Womens’ Trust, the Australian Government (DFAT) and many other generous donors, we assembled and packed the pilot in early 2016.

The first box was shipped to a teachers training college run by KTF (the former Kokoda Track Foundation) in a village called KouKou where it was assembled for initial testing and to gain feedback from trainy teachers, before being re-packed and sent by barge to the village of Tainabuna, in the fjords of Morobe. In late April, I flew to PNG with people from KTF to re-assemble it. It takes a whole day of travelling to get to the fjords from Sydney.  This is followed by 45 minute boat ride from the airstrip. It took us 14 hours to unpack and assemble the box in KouKou. This time we did in 5 hours.

Up to 50 men came to help. The deck they had built was fringed in garlands of flowers.  The school sits at the edge of a ridge towards the highest part of the village. On the opposite side of playing fields are  teachers’ homes. This is where they had elected to build it. A large frangipani tree at one corner. It is perched on a finger of the fjords, surrounded on three sides by seawater that you sense is there but which is shielded by a thick wall of jungle.

We are led back out of the village and make a ceremonial return though a specially-made archway of palm fronds, banana leaves and bougainvillea. There is a vast assembled crowd of parents and children. Elders from several clans and villages perform; painted and decorated with tapa cloth, leaves, feathers, shells, clay and ash all the while beating locally made kundu drums. Mats of sago are laid on the grass for us to walk over. It is both sublime and over-whelming. We have delivered a relatively small thing and it seems wholly inadequate for such a welcome.

School-in-a-Box will be monitored by KTF over 2017. Depending on its success, further boxes will be sent to other remote schools.  SEAM has since disbanded after 3 very hard but extraordinary years and the devoted efforts of many people, especially Drusilla. KTF has taken on the teaching program devised by Drusilla, called Making Books, and for which School-in-a-Box was tailored to provide the resources for.

As the designer of School-in-a-Box, Stephen Collier Architects are exploring how we might deliver more boxes in the years to come. We have set up a new fund to manage this and to take donations. If you would like to donate to the cause or assist please email info@collierarchitects.com with SCHOOL-IN-A-BOX in the subject line.

Many thanks to Peter Bennetts, Photographer. 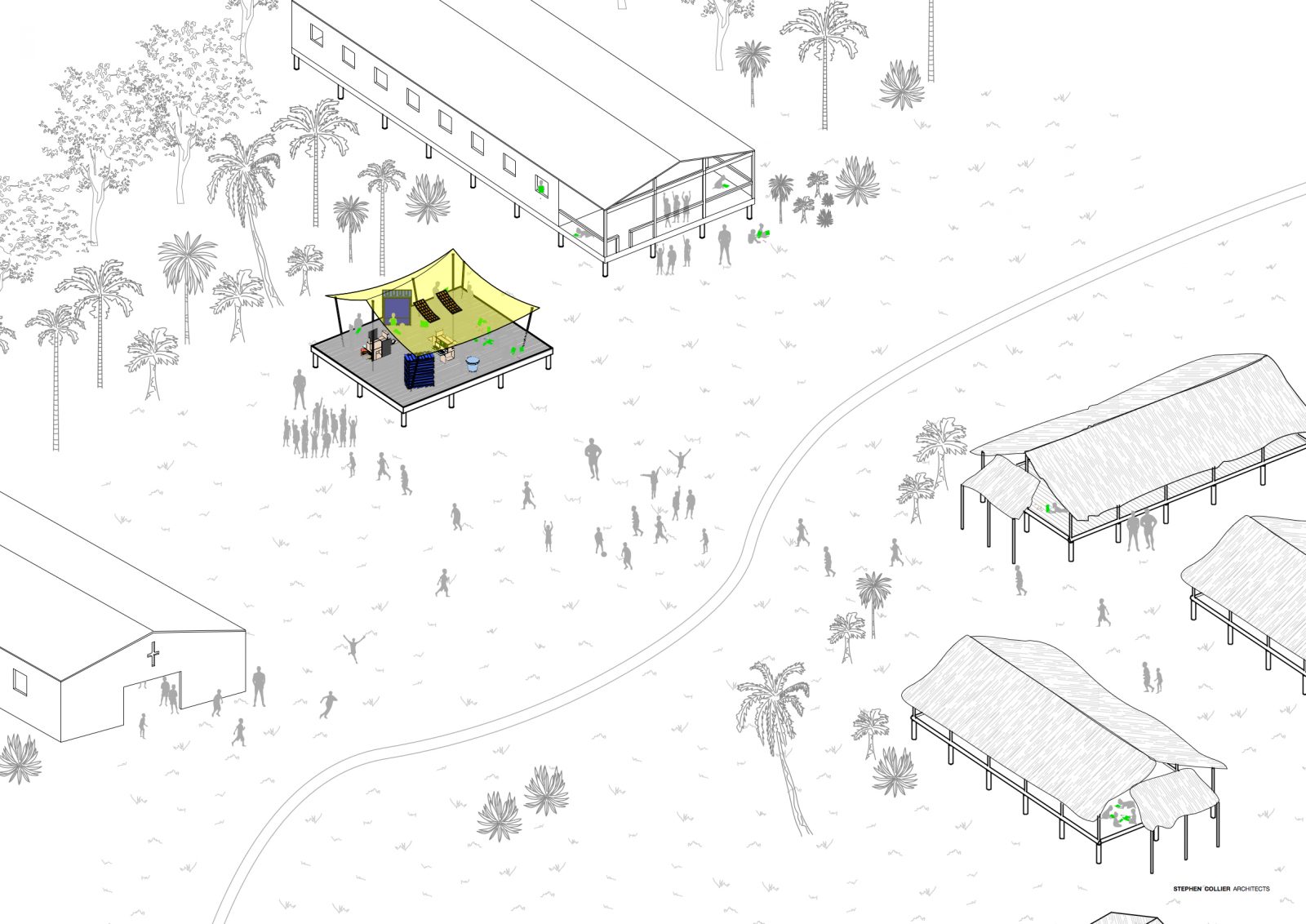 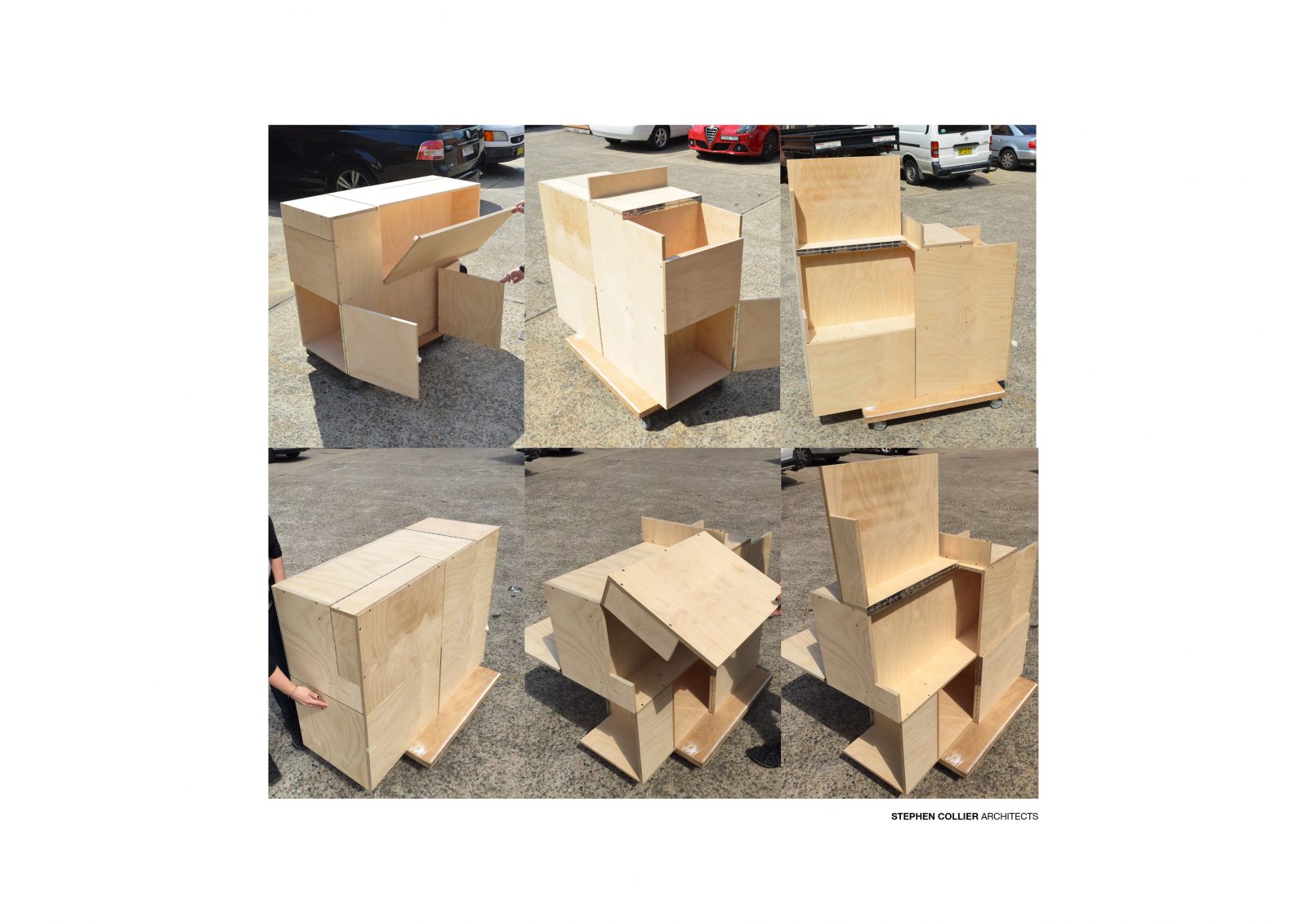 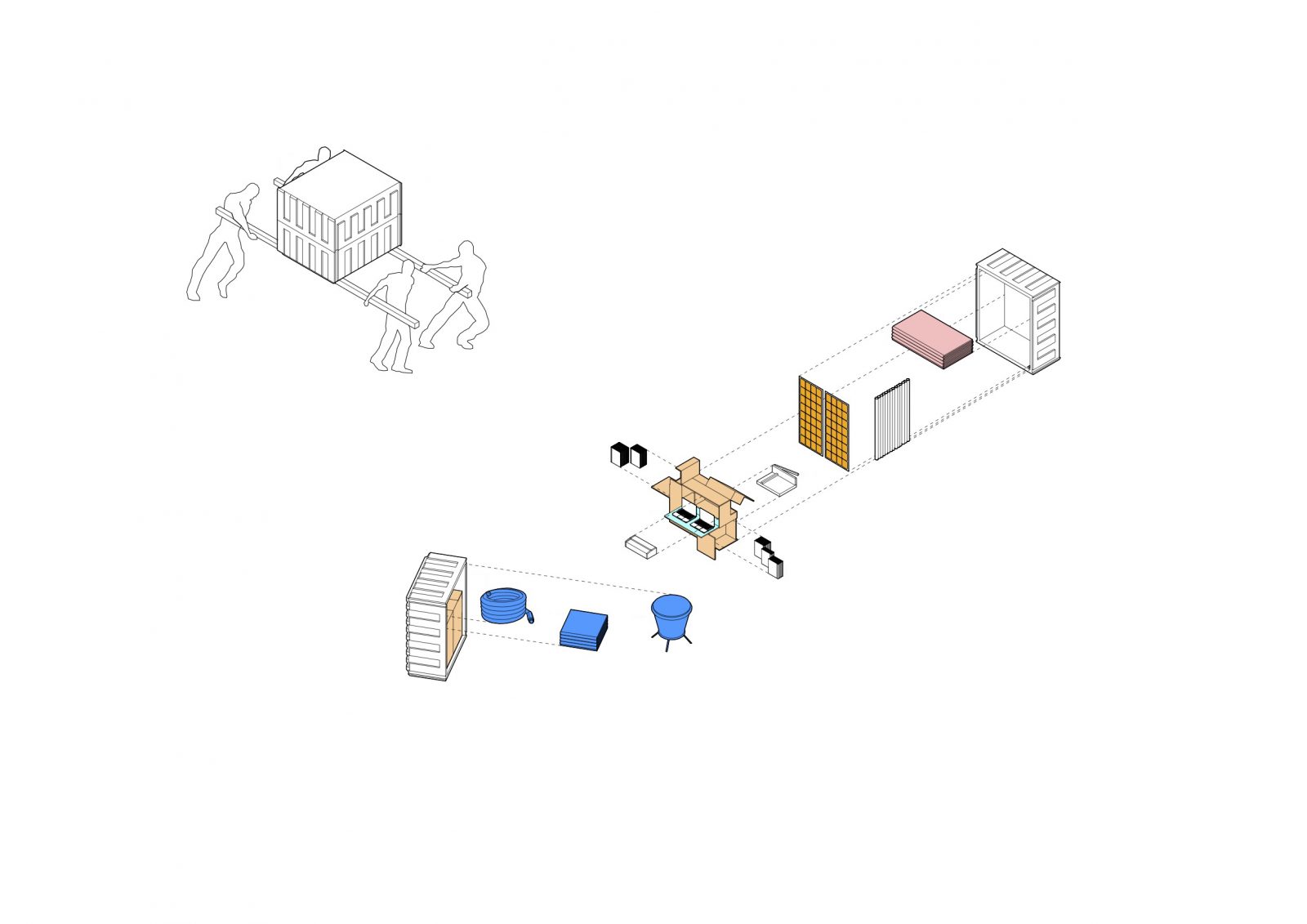 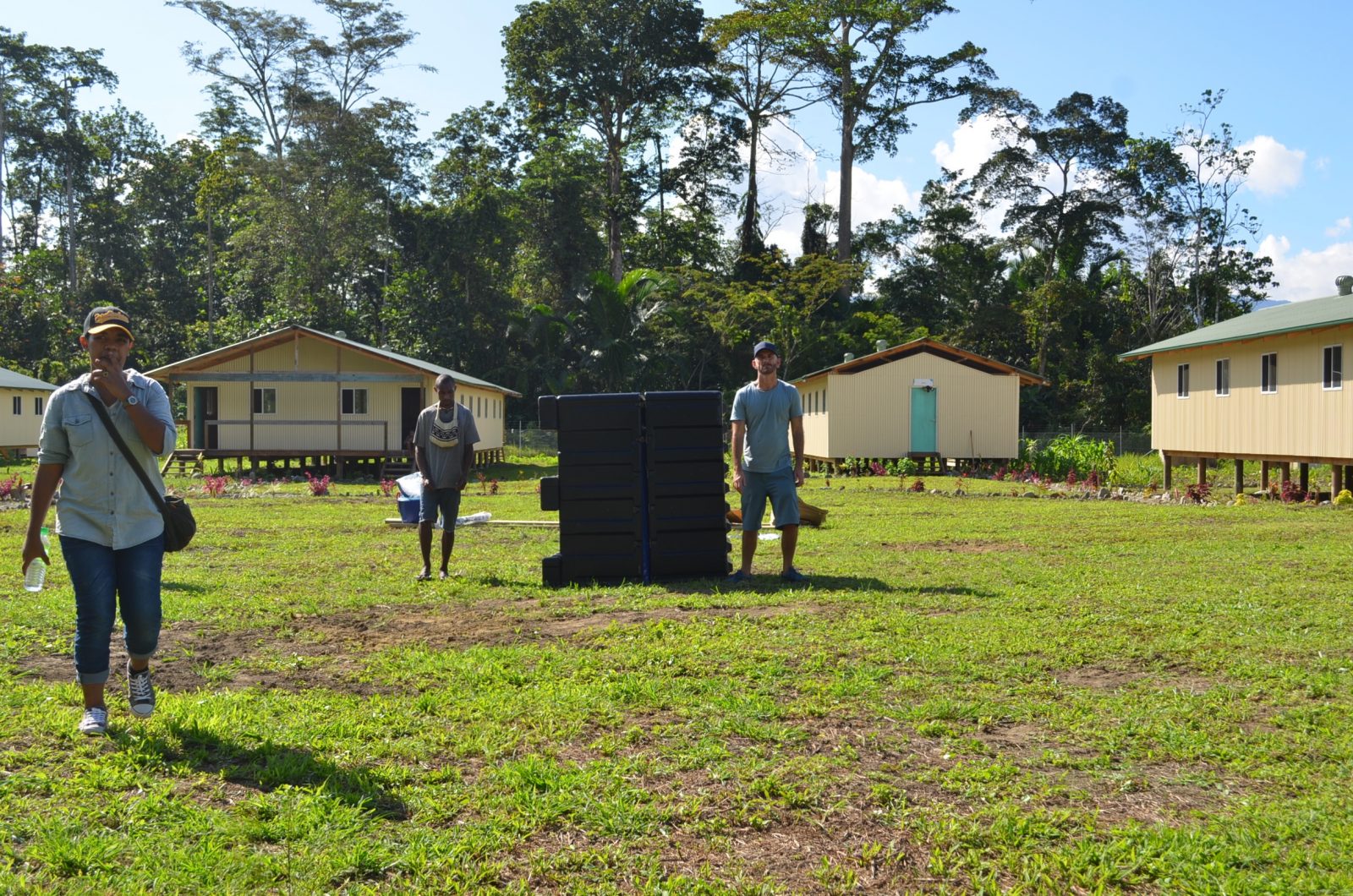 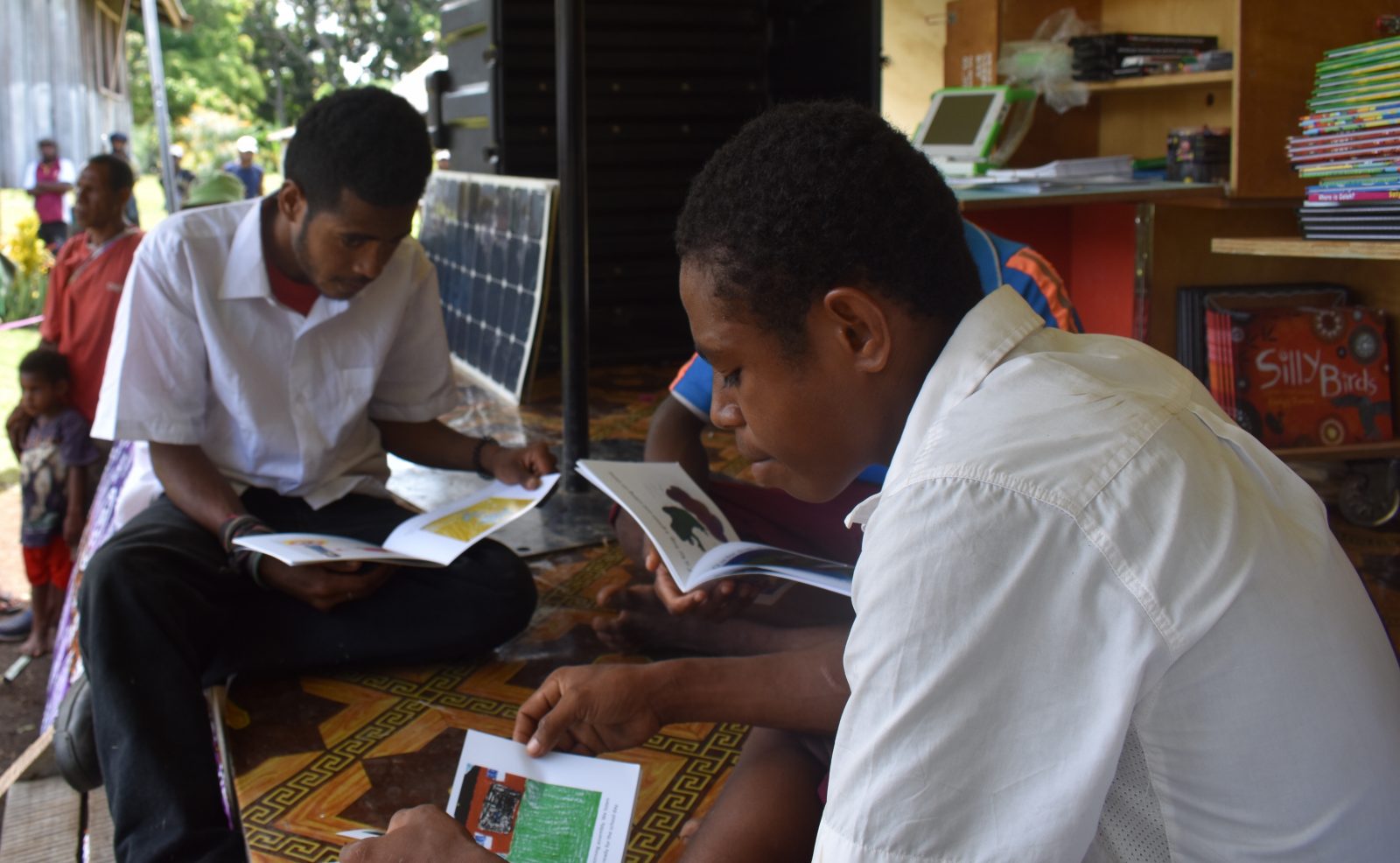 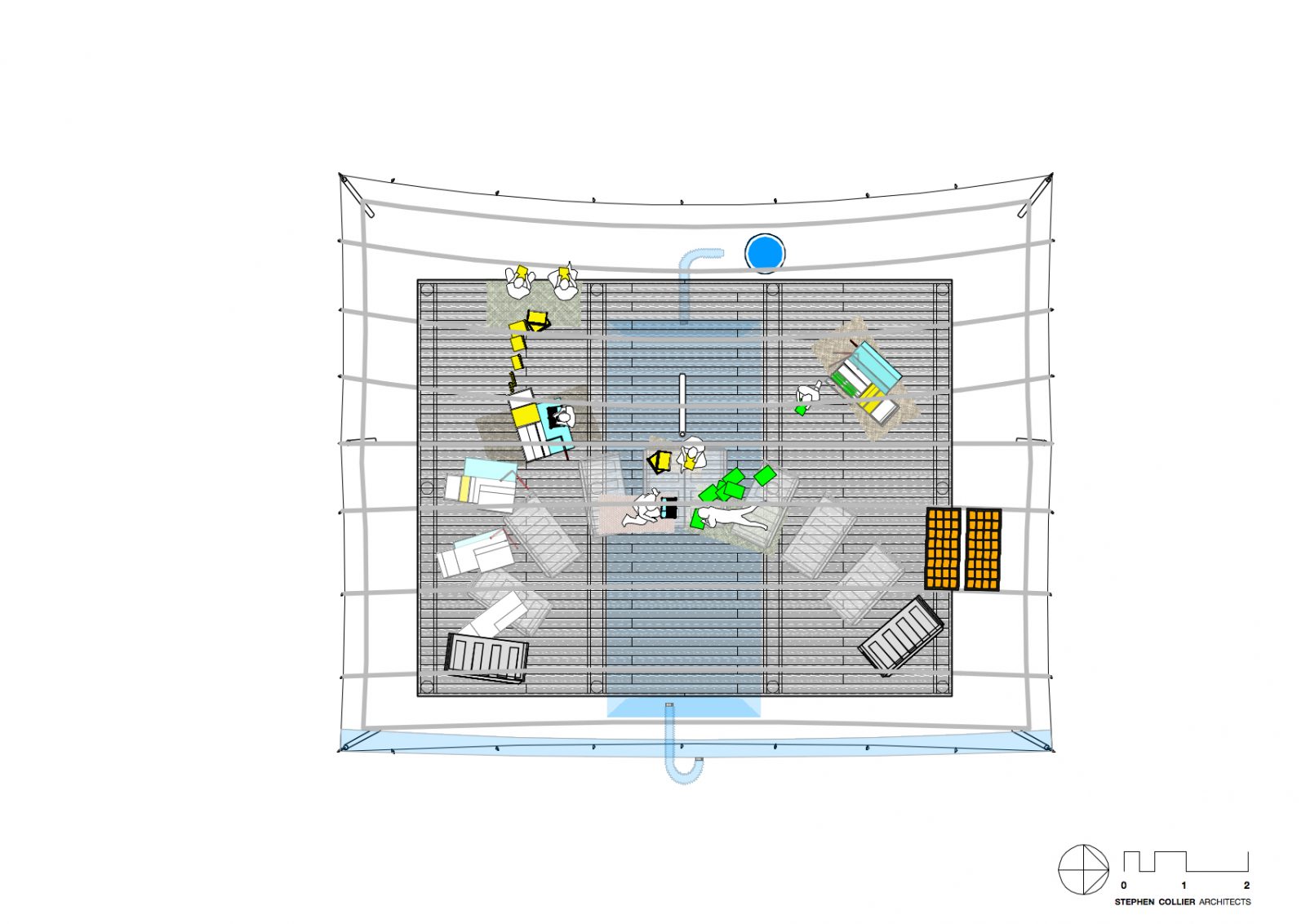 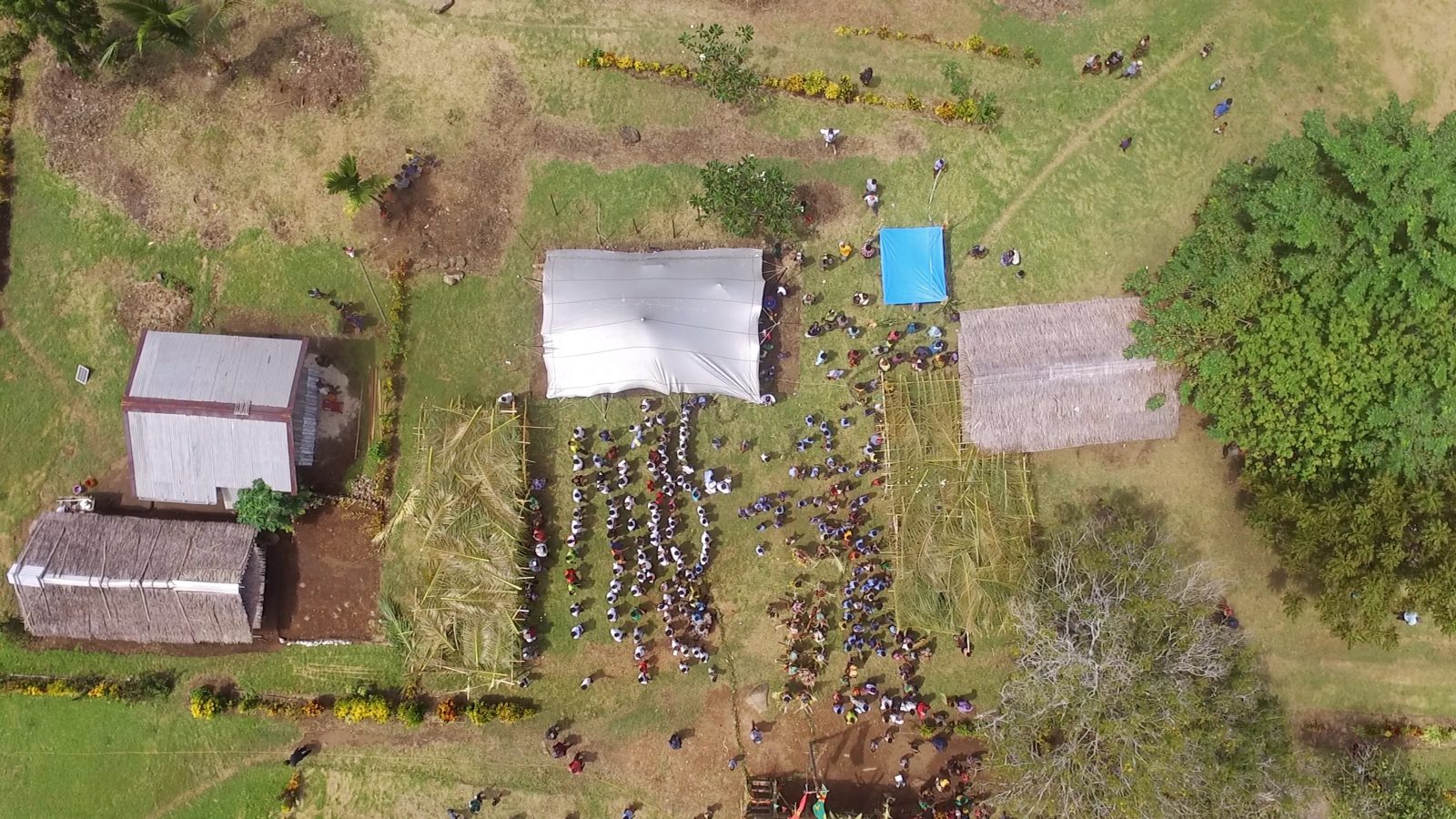 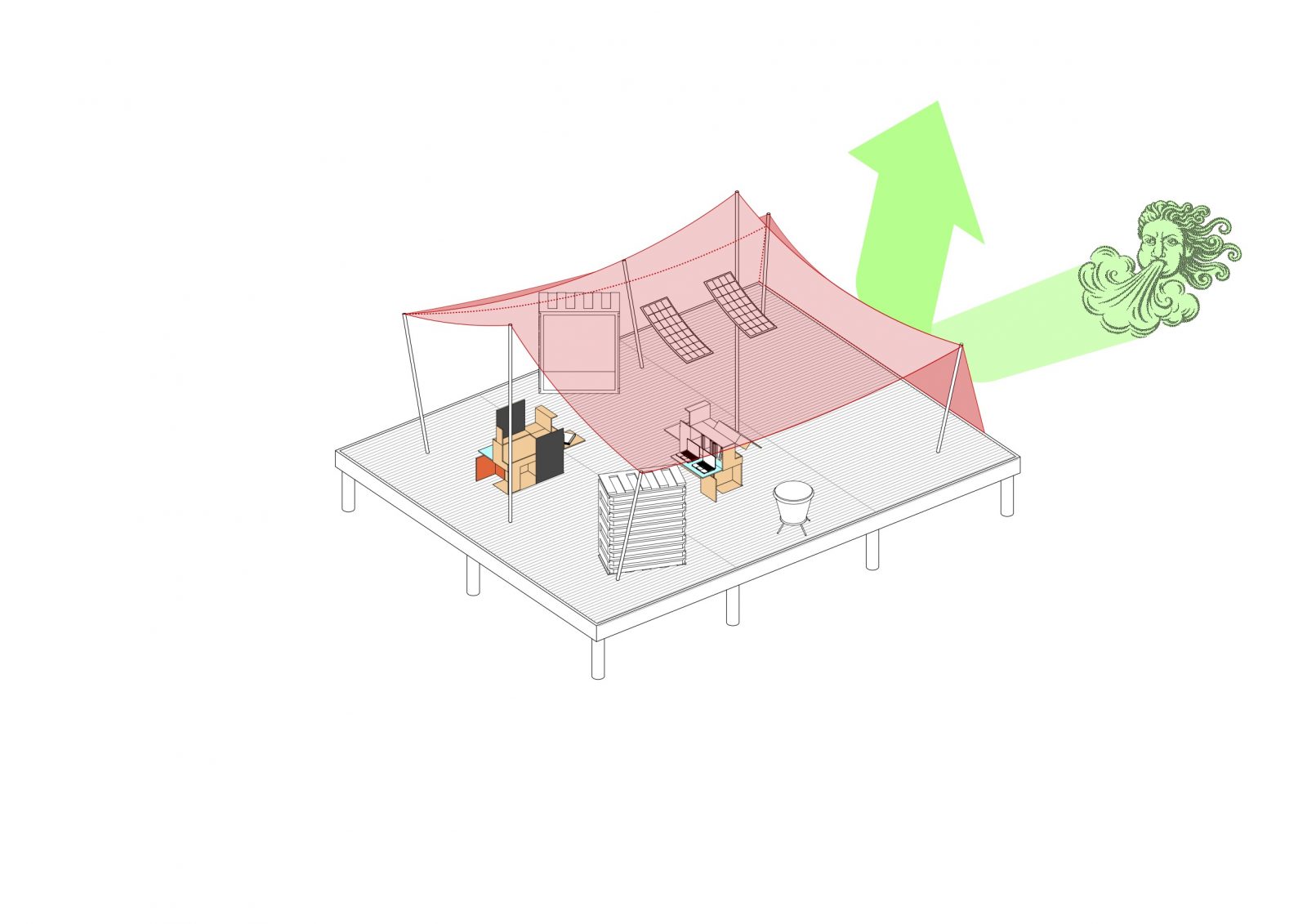 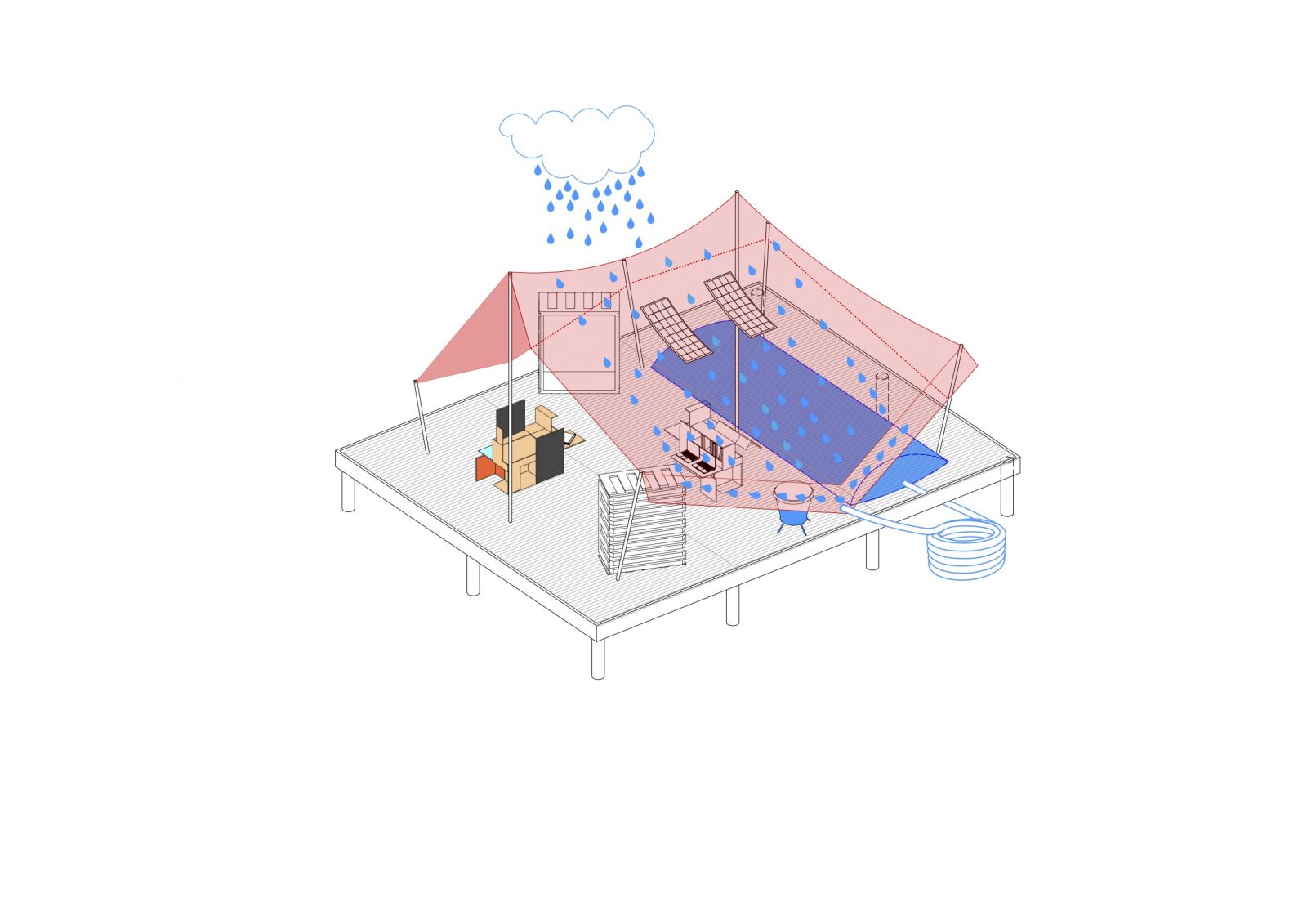 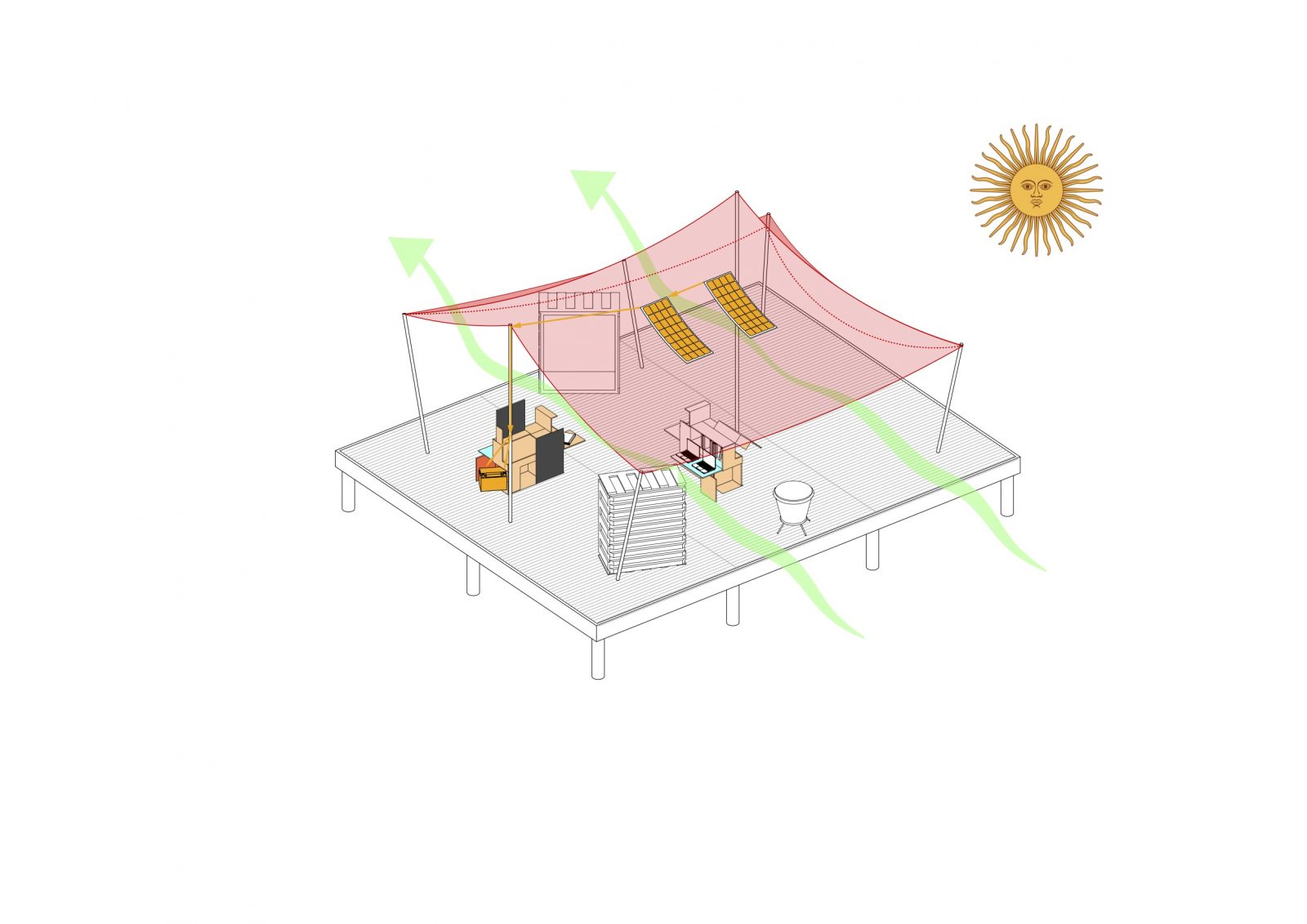 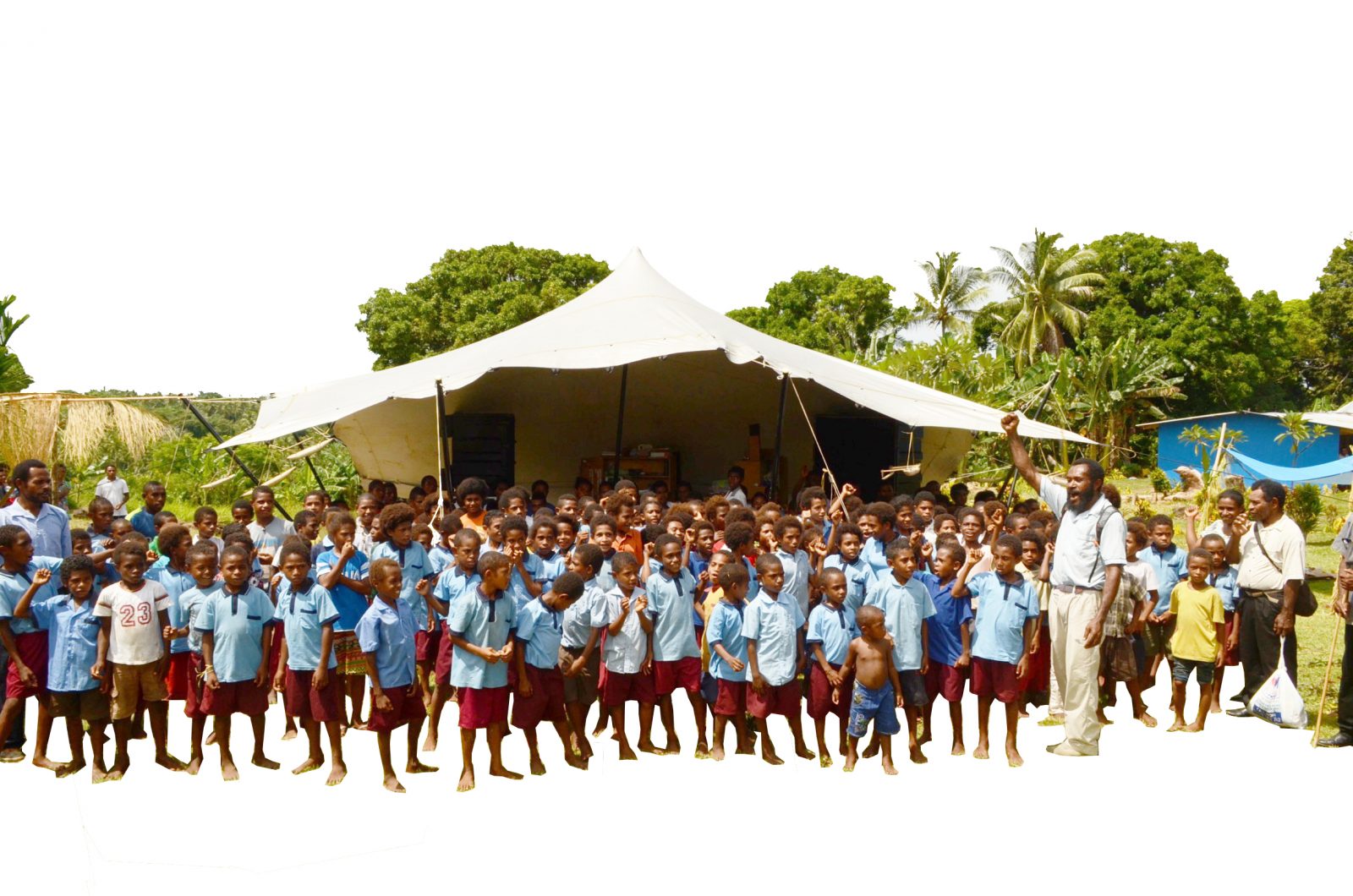 The Australian Government (Department of  Foreign Affairs and Trade)