A project about designing small that combines function and aesthetics. A 70sqm one bedroom apartment in Harry Seidler’s The Horizon building in Sydney converted into a two bedroom. It is common for designers to make better use of under-utilised space by getting rid of bedrooms and transforming say a two bedroom into a one bedroom. But rarely is the problem also approached by flipping the strategy and adding more bedrooms. This project innovatively does this by incrementally decreasing the size of circulation space, kitchen, laundry and bathroom down to their precisely configured and yet wholly functional proportions. And with the custom design of 150 doors and moveable walls, it achieves this whilst increasing the amount of storage, opening up the bathroom to natural light and ventilation, and by maintaining a sense of spaciousness.

The interior reconfigures itself like spatial jigsaw. The whole apartment can be made into one big room, for a single occupant or a couple. Or it can be closed down to create separate bedrooms in one of two ways: as a one bedroom with a generous living area or as a two bedroom with a smaller but still practical and comfortably proportioned living area. Both bedrooms and living area have plenty of natural light and air. The arrangement of furniture is loose and variable, allowing the dining area to work equally well at both the centre of the apartment and at the outer edge. The kitchen is folded into the rear corner of the apartment to one side of the entry and sitting opposite but in close proximity to the bathroom and laundry. A common path between these areas is kept open and free. The bathroom has a separate fully-enclosed toilet, allowing two inhabitants to comfortably use both shower and toilet at the same time. Extra space to change and dress can be provided in front of the basin by a wide concertina door which opens to the front of the laundry cupboard and entry. Storage for everything from shoes to dirty laundry and audio-visual equipment is ingeniously located for ease of access.

Maximising flexibility is a mantra of contemporary design. But flexibility often means exchanging one set of limitations (a lot of small rooms) for another (fewer but bigger rooms) or vice versa. This project avoids this by providing the option for both scenarios with moveable walls and doors that are simple and quick to operate. It enhances different spatial configurations by the playful use of colour, variously enhancing the sense of distance and closeness of both surface and object. LED fittings are the only source of lighting in the project and 100 year old Hoop Pine has been recycled for use in the floor. 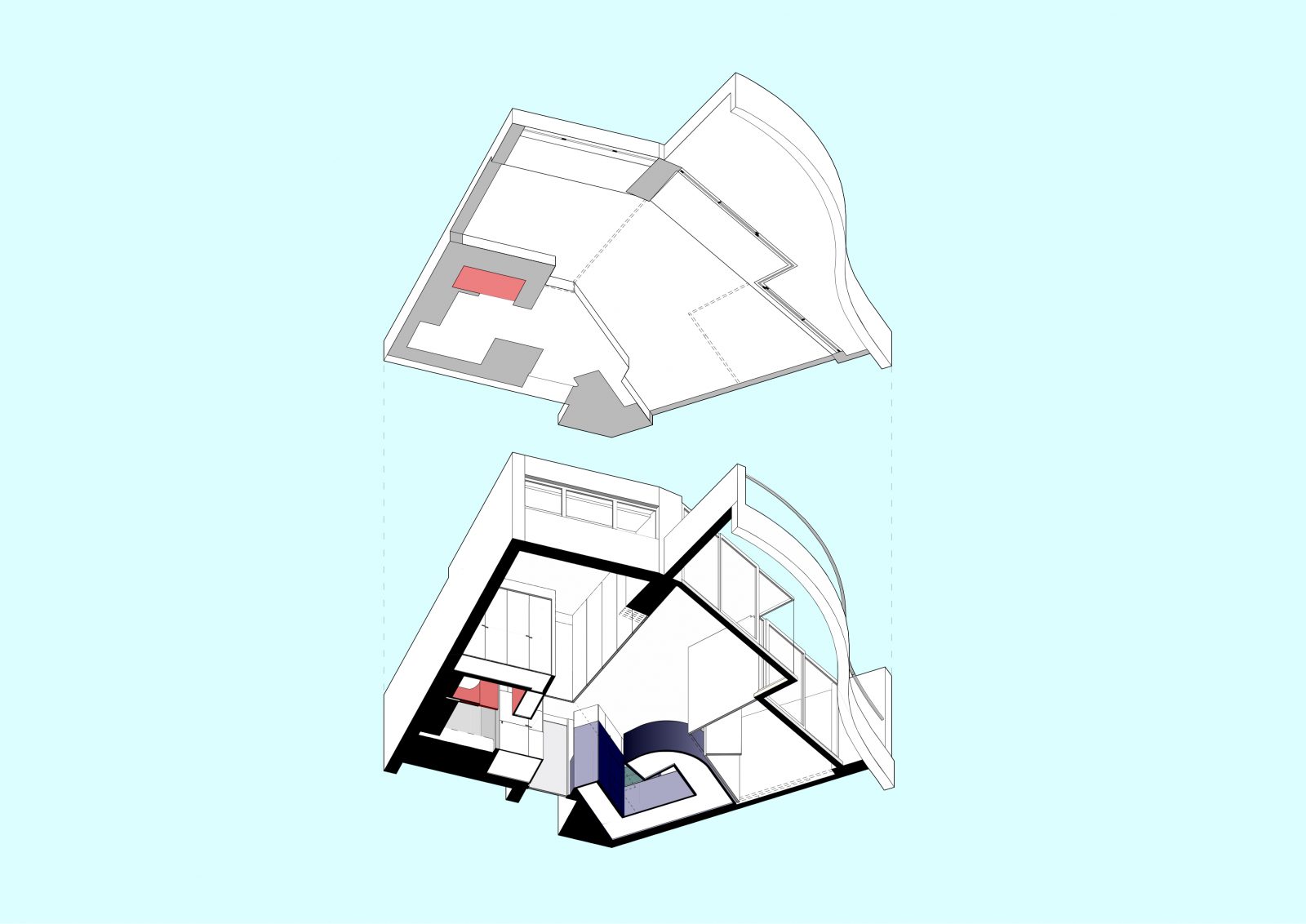 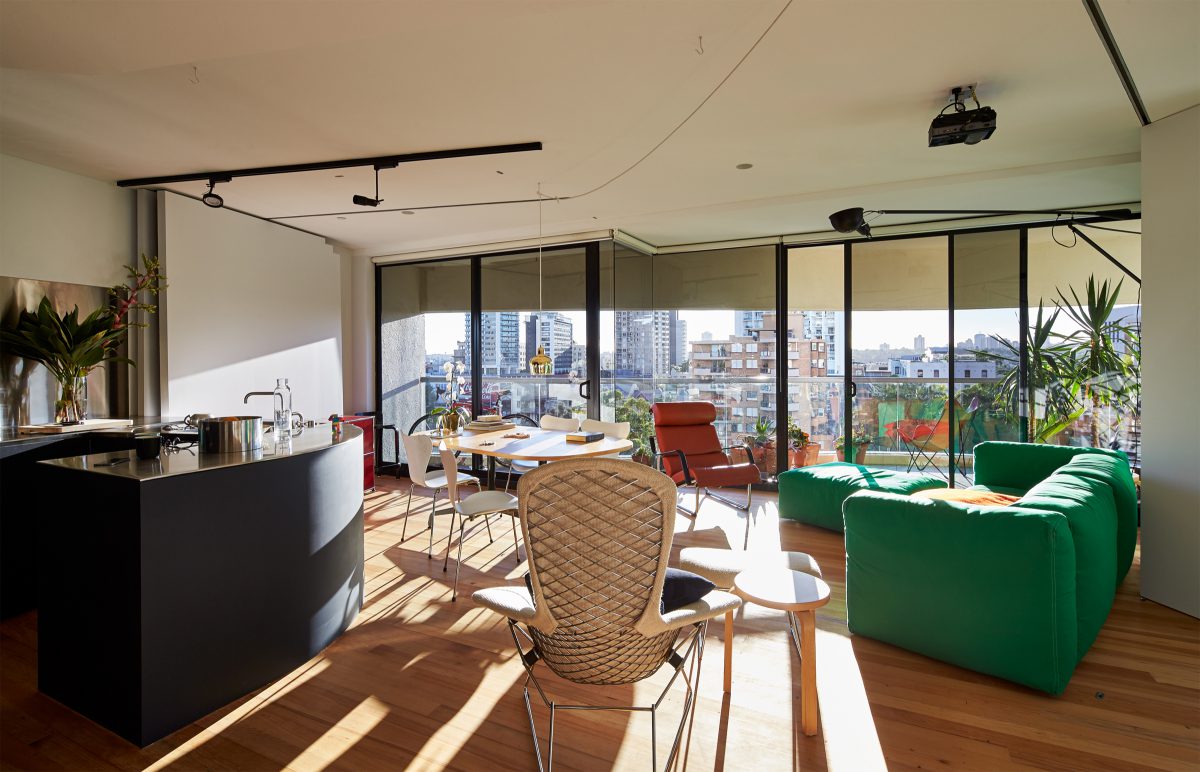 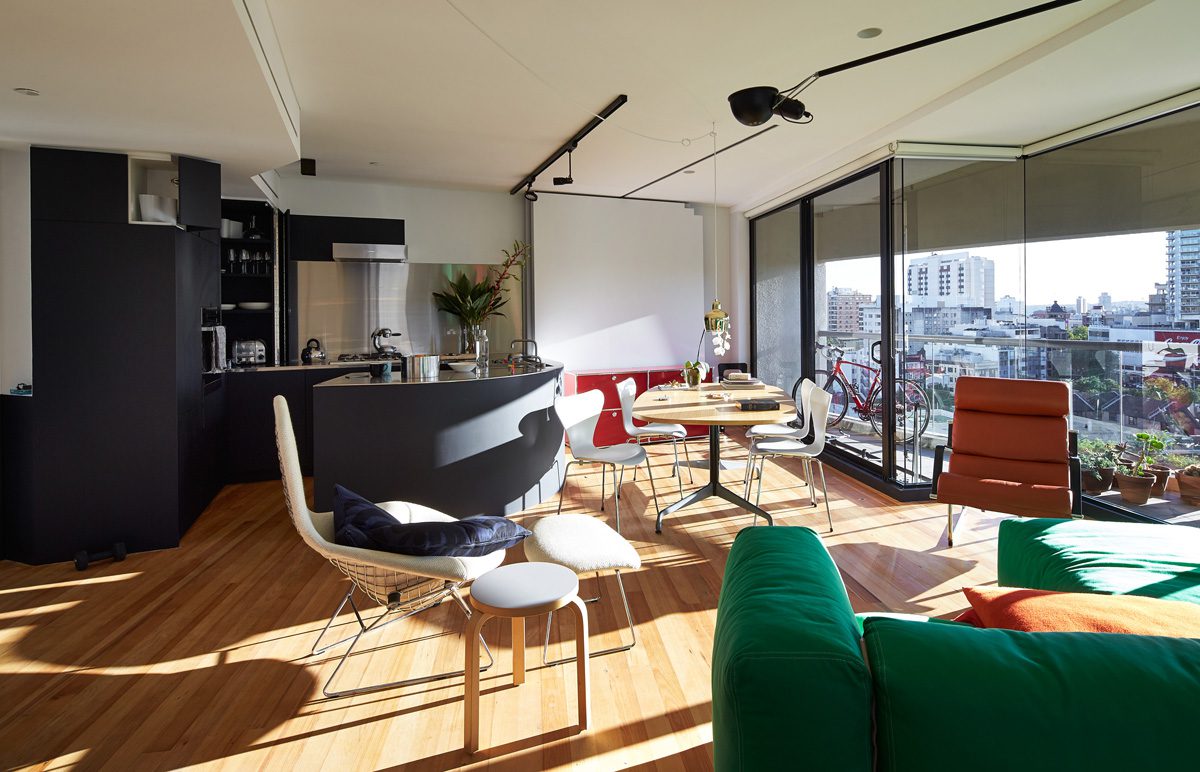 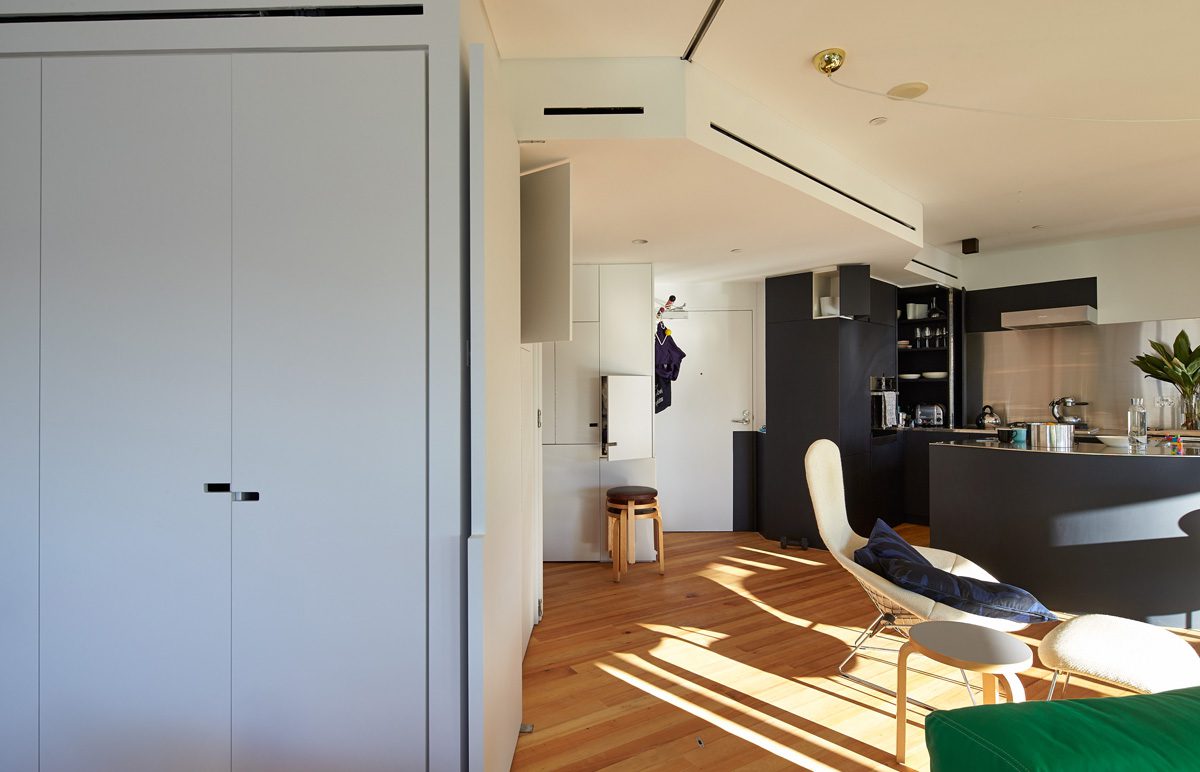 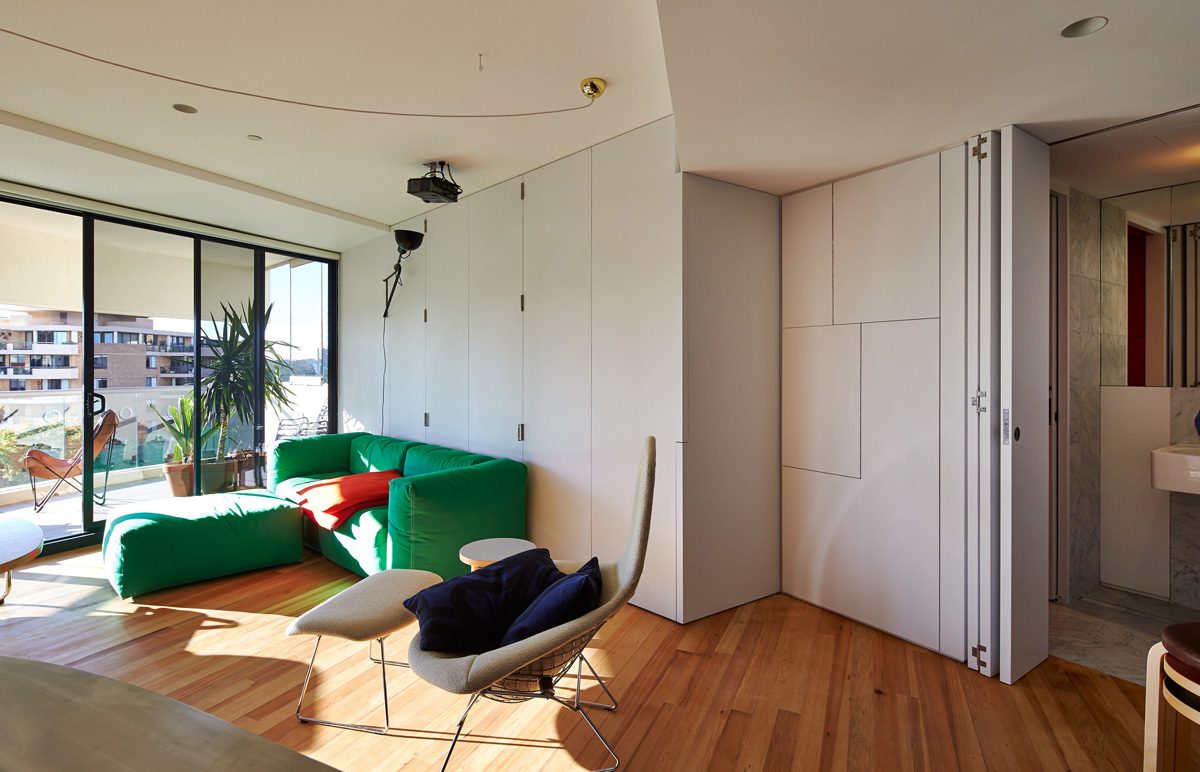 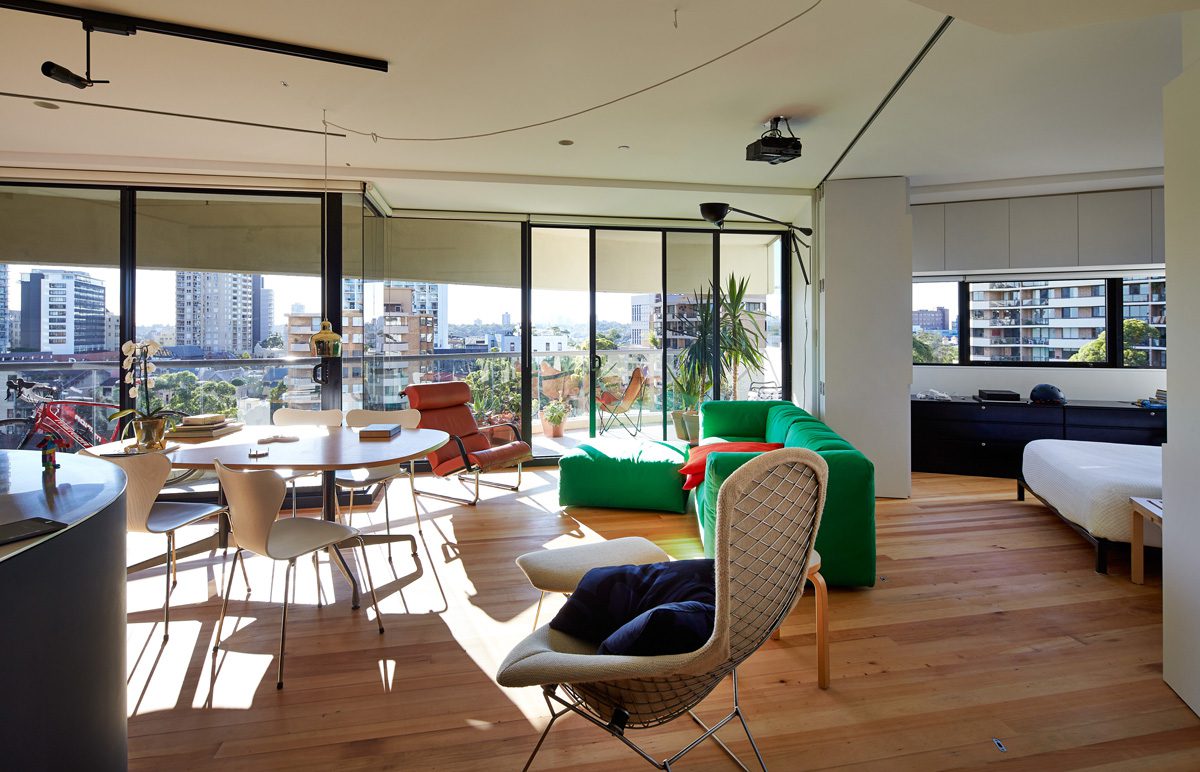 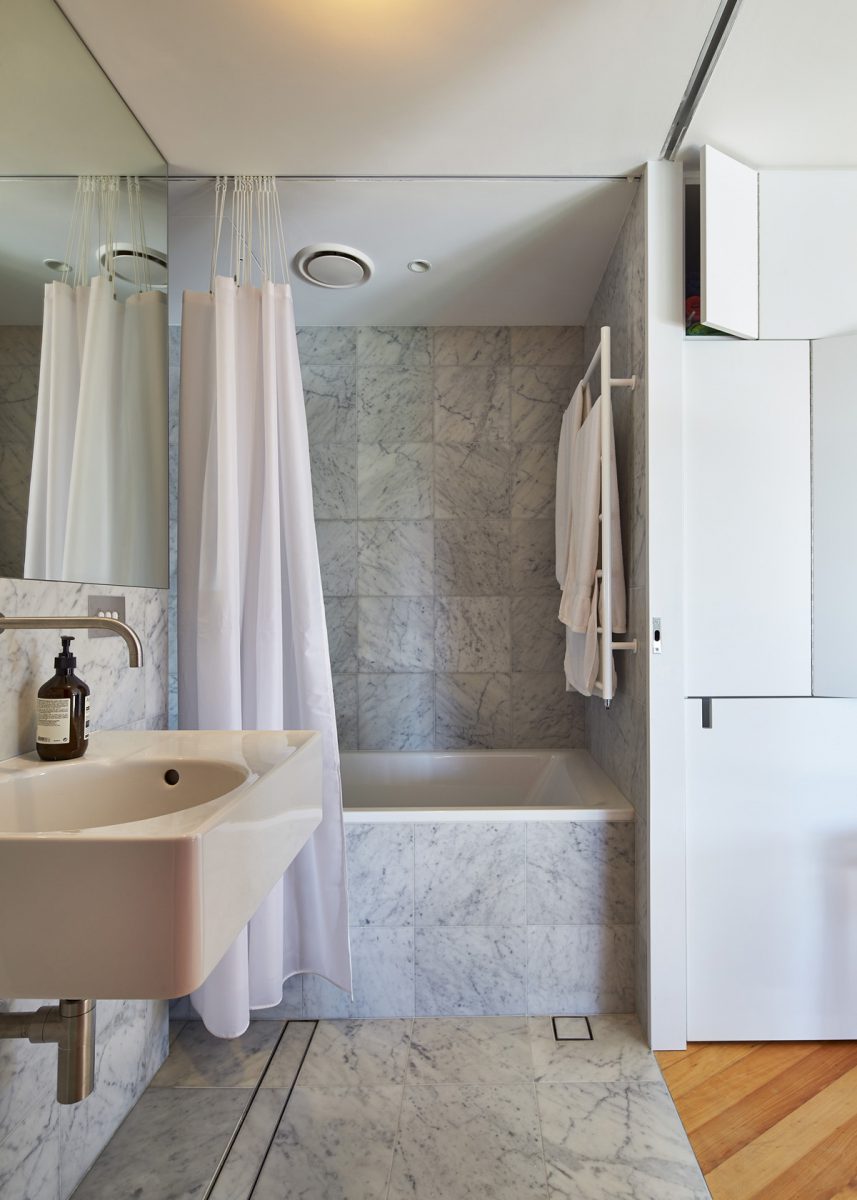 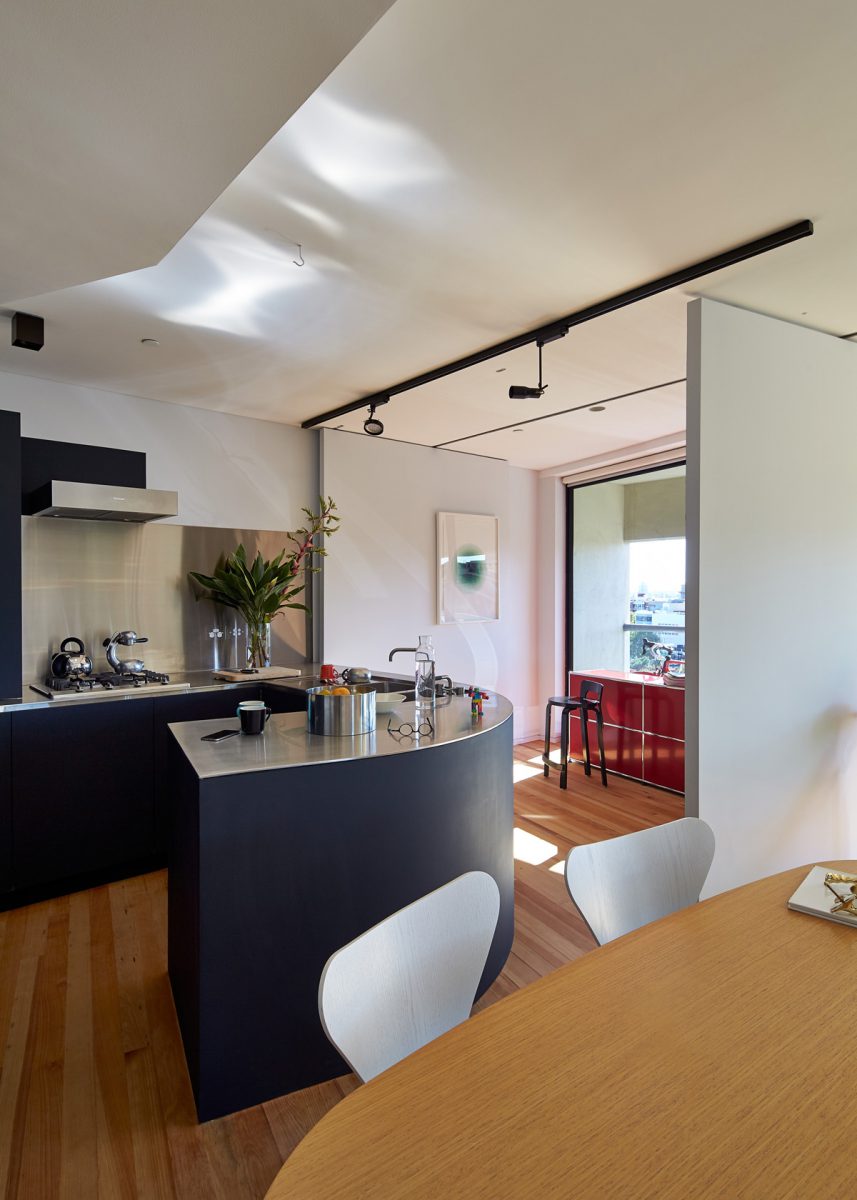 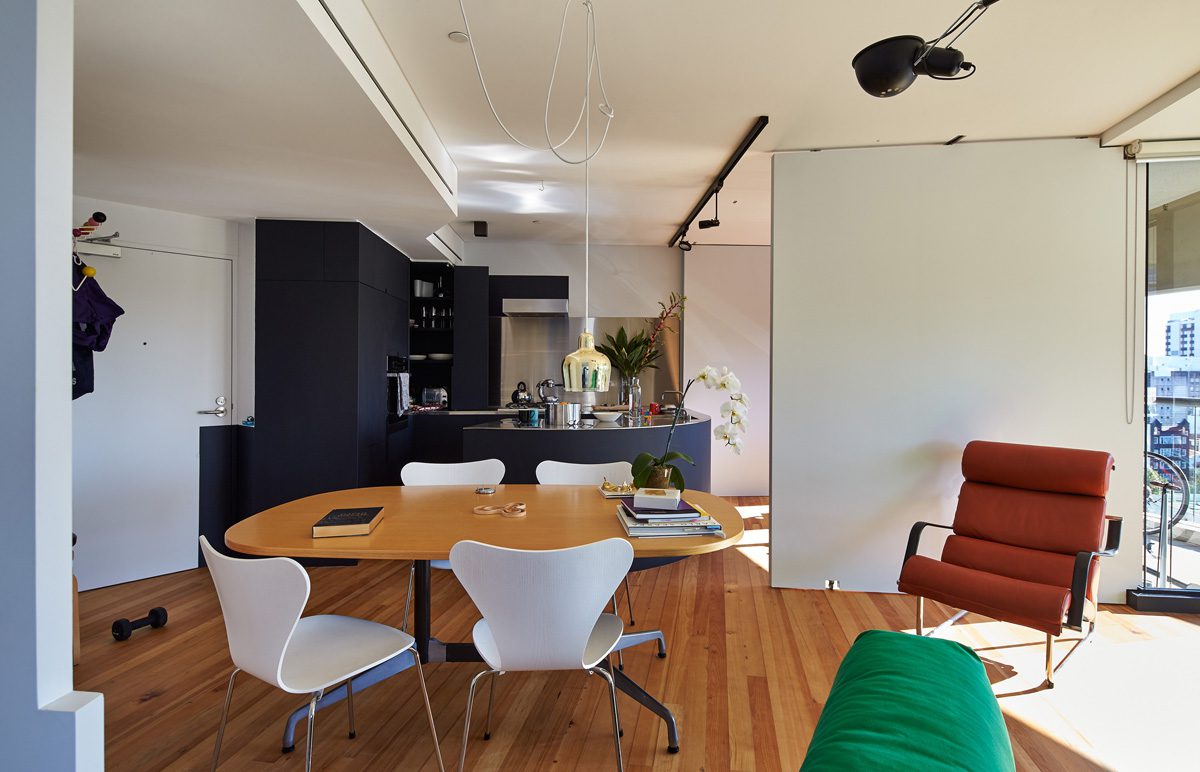 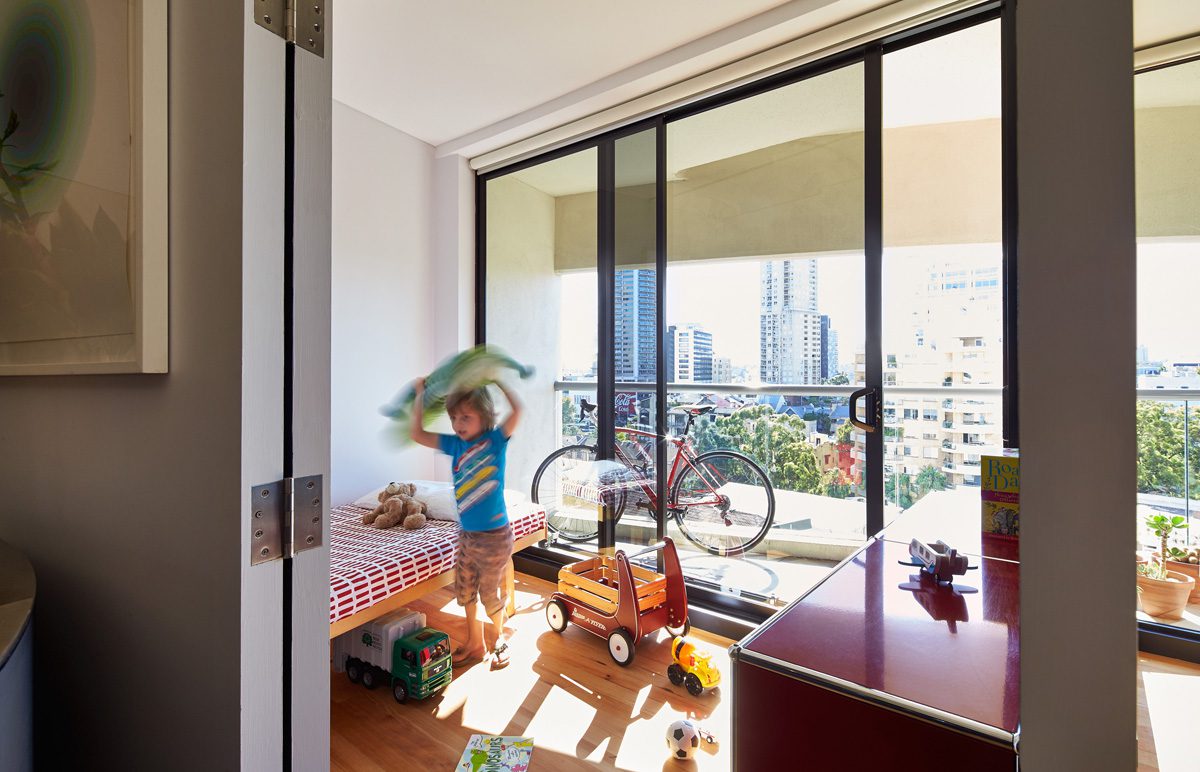 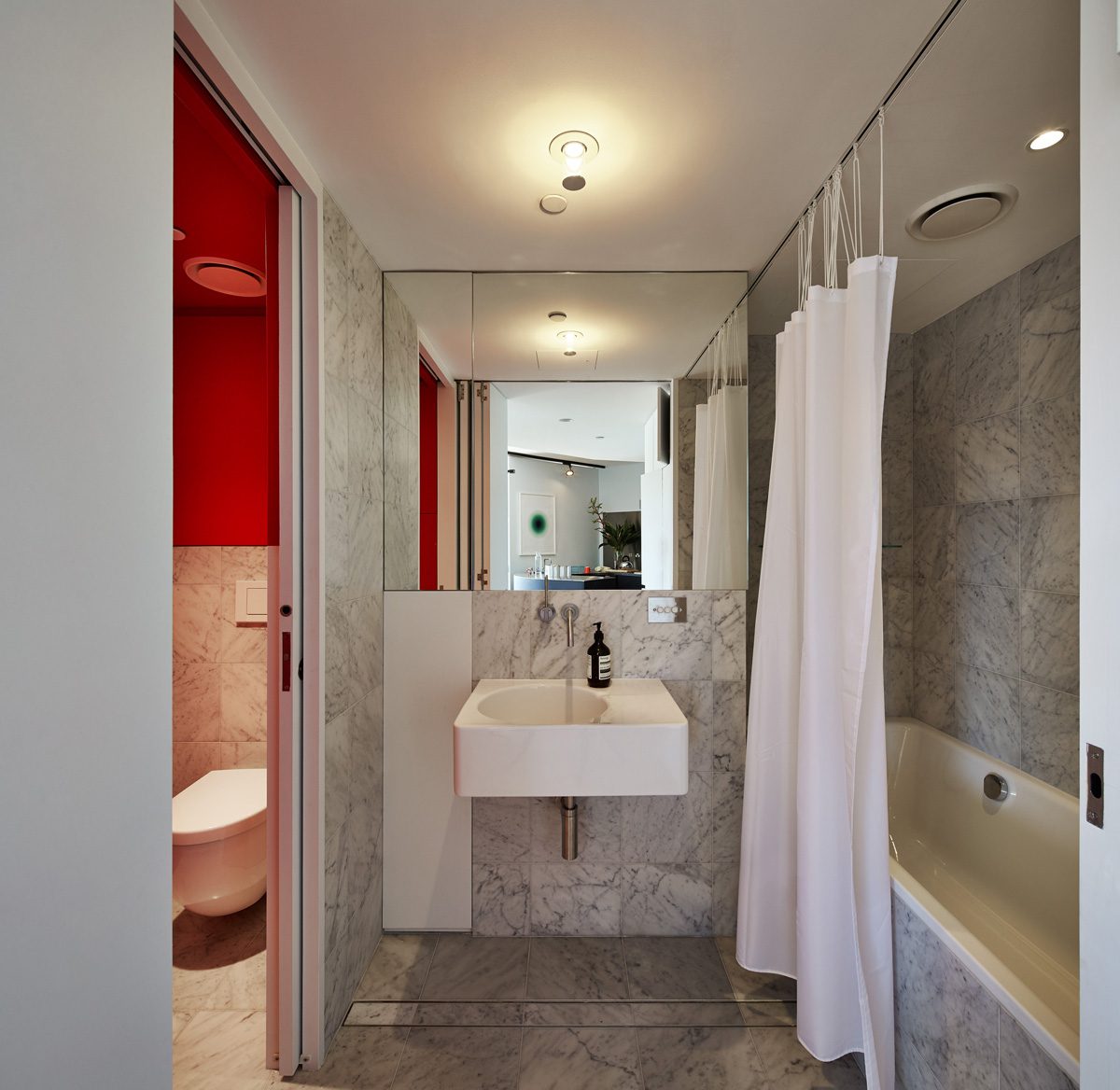 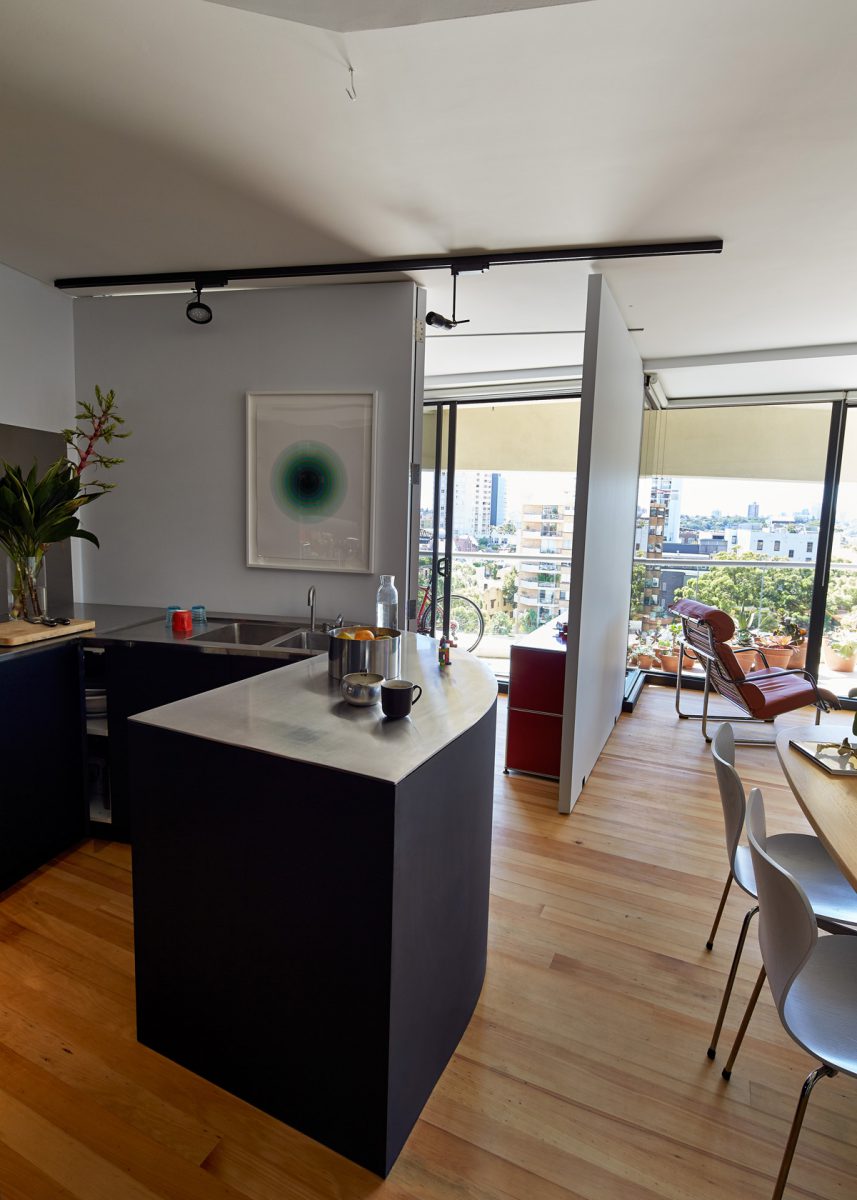